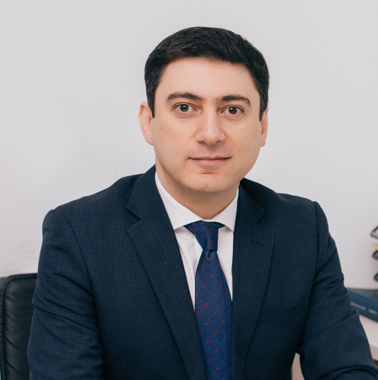 Vusal has over 20 years of experience in the road safety field. He has led road safety projects of HAYAT and the National Automobile Club of Azerbaijan (AMAK), which he regenerated and relaunched to become a member of FIA in 2015, and managed transport operations of 2 biggest events hosted in Azerbaijan – the Baku European Games and Baku Islamic Solidarity Games.

Mr. Rajabli has over 20 years of experience in the road safety field. He has led road safety projects of HAYAT and the National Automobile Club of Azerbaijan (AMAK), which he regenerated and relaunched to become a member of FIA in 2015. He also managed and led transport operations of 2 biggest events hosted in Azerbaijan – the Baku European Games and Baku Islamic Solidarity Games. Since June 2020 he is working as an Advisor to the Minster of Energy of Azerbaijan Republic and responsible for IT, Innovations, and e-Mobility.

Founder and President of HAYAT – leading national NGO
Established in 1993 to respond to the thousands of refugees and IDPs from the Nagorno Karabakh conflict, HAYAT has accumulated vast experience in community development, public awareness campaigns and large scale projects in cooperation with international organizations such as UNHCR, Save the Children and Mercy Corps International. The remit of HAYAT has evolved over the years, and one of its key focuses is now reducing road fatalities and injuries in Azerbaijan.

National Automobile Club of Azerbaijan (AMAK), (Sept 2011 – June 2020)
Appointed in 2011 to rebuild the club. Under Vusal’s leadership the Club has been relaunched and readmitted as a full member of the FIA.

Key responsibilities included establishing and coordinating relationships with senior representatives of Azerbaijani government and all related transport agencies in Baku for designing the Baku 2015 Transport Plan and its implementation, identifying and resolving complex issues with local officials and all transport related government agencies through Transport Working Group.

Head of Transport, Azerbaijan Islamic Solidarity Games Organizing Committee, Baku, Azerbaijan (June 2016 – June 2017)
Like his role and scope during European Games, but with more responsibilities, less staff and budget, which made it much harder to achieve high standard service. Despite all that, no transport incident happened during Islamic Games and customer satisfaction level was the highest among all Islamic Games in its 10 year history.

Advisor to the Minster of Energy of Azerbaijan Republic (June 2020 – present)
Responsible for IT, Innovations, and e-Mobility. As we all know electrification of transport and creation of a relevant infrastructure is one of the primary goals of many countries for the last decade. It is not an easy goal as it may seem, but by achieving it countries will not only reduce CO2 emissions produced by transport and affecting population of cities, but also reduce accidents and make transport much smarter and safer. Safety of road users has always been one of the main goals for Mr. Rajabli and that keeps him even more motivated in his new duty.